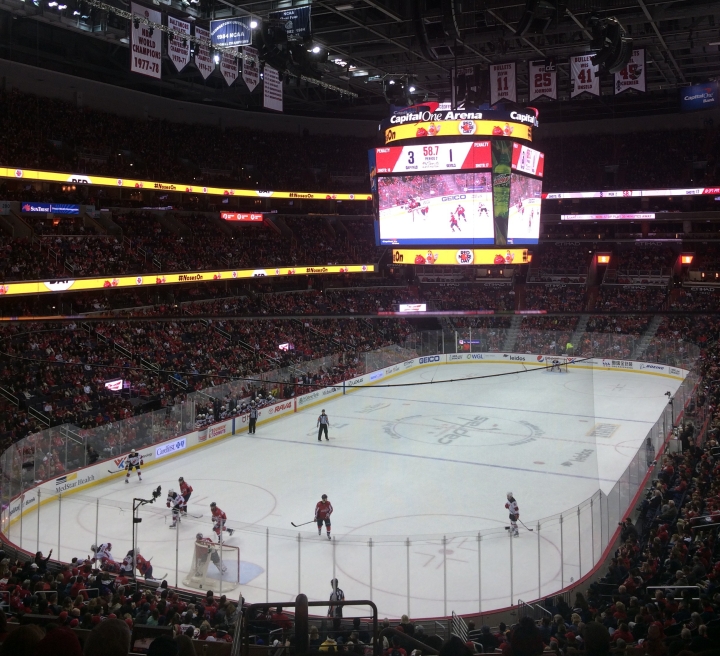 I added attending a Capitals game to my DC bucket list back in August. Despite my tenuous-at-best knowledge of sports, I’ve chosen to cheer for the Panthers, the Nationals, and the Wizards in their respective sports. I wanted to go to a Caps game before I could claim them as my hockey team. The Devils game was the last regular-season match and my roommate scored me suite tickets (Thanks, Roomie!). H and I don’t know most of the rules of hockey, but we had a blast cheering for the Caps, eating suite mac and cheese, and eavesdropping on the guys behind us who seemed to understand the game.

As soon as we got on the metro, we started seeing other fans wearing Capitols jerseys. More Devils fans than I expected were there as well, although I should have seen that coming since EVERYONE in DC is from New Jersey. H knew the area around the arena well, but we could have followed the stream of people who were obviously headed to the game there.

We picked up our tickets and got to the suite just in time for the national anthem. The Capitals scored two minutes into the game, when I had barely figured out who had the puck and which team’s goal was which. The first scuffle broke out on the ice eight minutes into the game, which was closer to the timeline I expected. For once, H was as clueless as I was about the details of the game, so we both just tried to pay attention. The game was unusually high scoring—the final score was Capitols 5 to Devils 3. Ovechkin scored his 48thand 49thgoals during the game, and we were all hoping for his 50thgoal, but also happy with the overall win. Although I didn’t learn a lot about hockey, the game kept me on the edge of my seat. 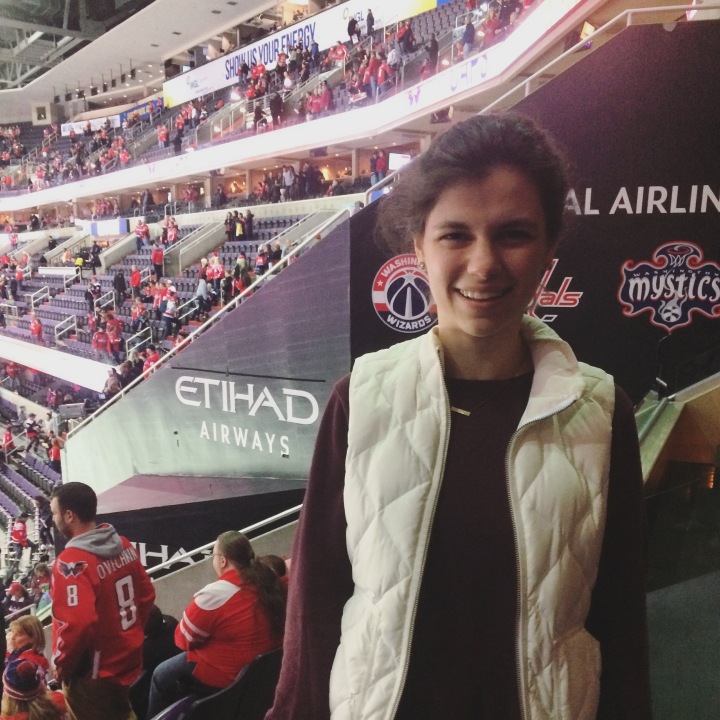 I don’t have a Capitals jersey, or any DC sports paraphernalia, so I had no idea what to wear. I remembered from the college hockey game I went to years ago that the arena was chilly, so I stayed warm and comfortable in a J Crew sweater and puffy vest in colors that vaguely resemble the Caps’ colors with jeans and suede boots. We joked about the arena being cold to keep the ice from melting, but it really was!

Have you been to a pro hockey game? Is it a hockey game, a hockey match, or both? Which bucket list item should I tackle next? Let me know in the comments!