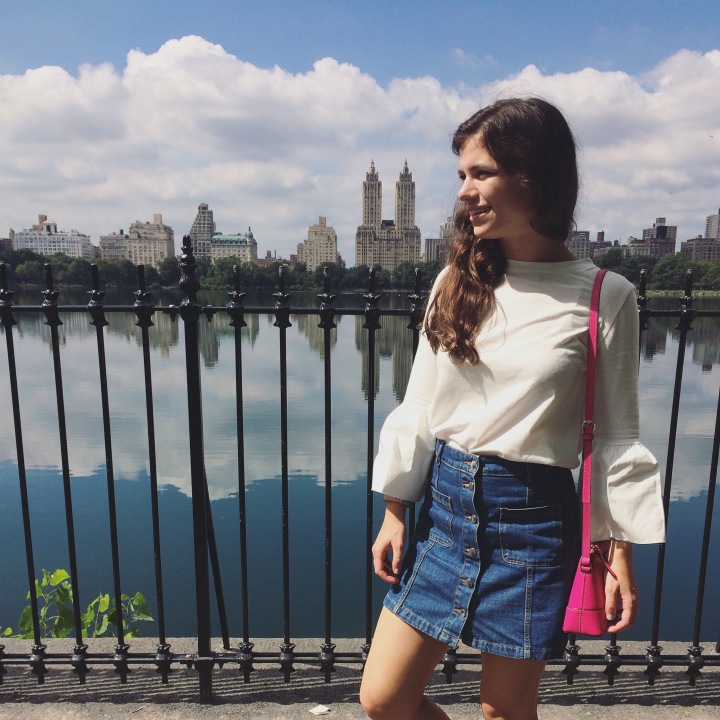 One of my best friends from college moved to New York City after graduation, and I finally went to visit her this past September. I’ve only been to New York twice before, once on a school field trip and once for a job interview, so I was ready to be a total tourist. This girls’ weekend was the perfect opportunity.

Since I would haul everything through several public transit systems, I needed to pack lightly. I managed to fit two outfits, a pair of sandals, workout clothes, and running shoes into my Madewell weekender, and I packed my laptop, toiletries, and a few books in my backpack. My bags were manageable, although I regretted bringing the laptop—of course I didn’t work on the train like I thought I would. For the train trip, I wore a simple white t-shirt, denim shorts, Adidas originals, and a flannel shirt in case the train was over-air-conditioned.

Since it was the weekend before Hurricane Florence, I planned to get to the train station about an hour early—I wasn’t taking any chances. H dropped me off at the metro station, and one transfer later I was at Union Station. I got a coffee and then realized with horror that there wasn’t another train leaving from my platform before the one to New York, so the 75-person line in front of my platform was for my train. I trudged to the end of the line and waited patiently until we finally boarded the train, half an hour behind schedule. I found a seat and settled in with a book.

My friend’s apartment is in Brooklyn, and I had claimed I would be fine getting there on my own from Manhattan, but I was relieved when she said she would meet me at Penn Station. We spent the subway ride to her apartment catching up and hashing out our plans for the next day.

The next morning we started our day with a long run in Prospect Park. We wound our way through a farmer’s market, where we were dodging dogwalkers and baby strollers, then turned onto a paved trail with tons of other runners and bike riders. The park was bigger than I expected, and the trail took us on a nice three-mile loop. The weather was perfect, bright but not too hot, and I was excited to start our day of exploring.

Post-run, we showered and got ready for the day. I put on my carefully chosen “city exploring” outfit: this white blouse with ridiculous bell sleeves, a denim button-front skirt, and the same Adidas Originals I wore the whole trip. We stopped for bagels and coffee before we left Brooklyn, and while I had been squealing “this is so New York!” since we got to my friend’s apartment the night before, the bagel place was SO NEW YORK. It was tiny, with an awesome tile floor and old wood paneling. We squeezed into a marble-top table in the corner to eat our bagel sandwiches and watch people buy groceries and order sandwiches from the deli counter. 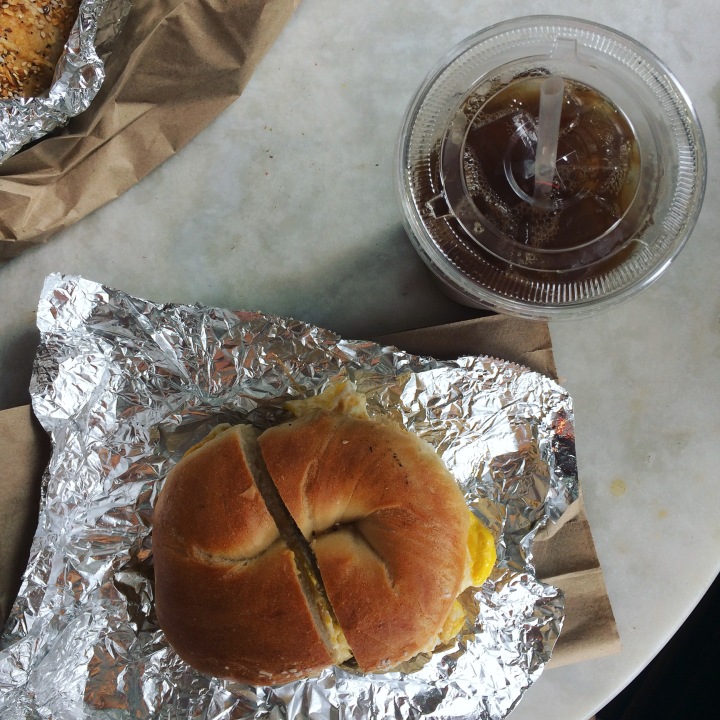 Our Only Opportunity to Sing Danke Schön on a Float

We took the subway to the Upper East Side in Manhattan and walked towards our first scheduled stop, the Metropolitan Museum of Art. As we got closer to the museum we started seeing kids with their cheeks painted with the German flag and families walking dachshunds. At first we thought it was a coincidence, but then we heard music and saw that the streets were blocked off for a German-American Oktoberfest parade. The parade was just like the one in Ferris Bueller’s Day Off, complete with floats, dancers in lederhosen and dirndls, and a marching band! Once we got past the parade, we were right by Central Park and the Met. It was so beautiful outside that we decided to explore Central Park first. It wasn’t too crowded for a sunny Saturday, and we walked in a big loop around the reservoir, stopping at the iconic Bow Bridge. 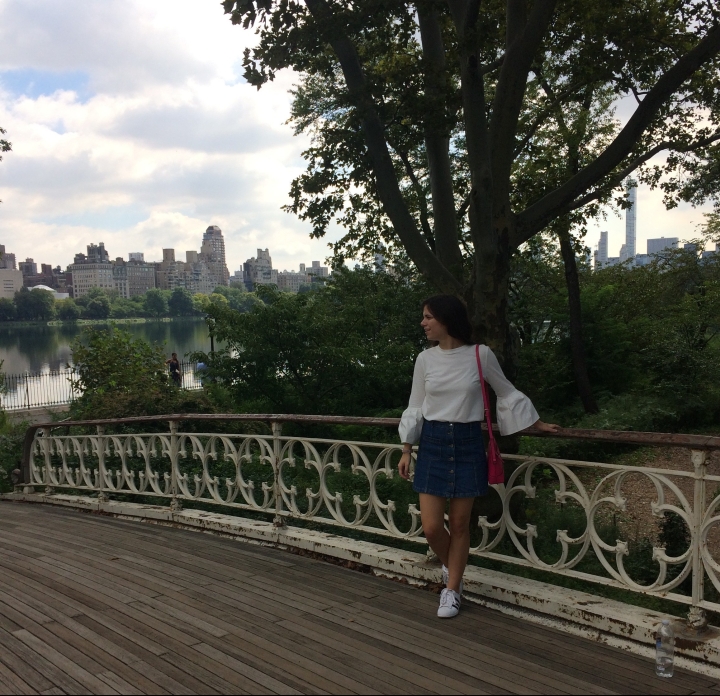 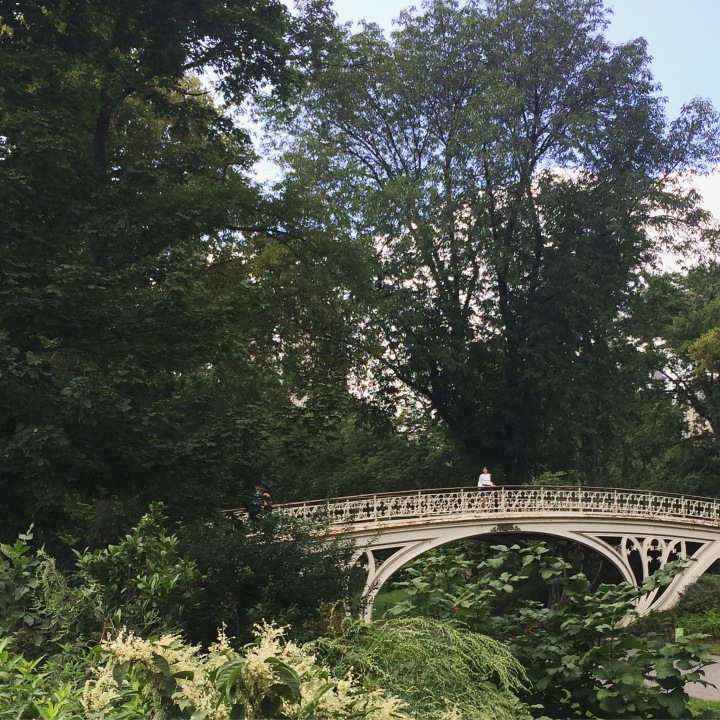 Once we were back at the Metropolitan Museum of Art we joined the throng of people streaming into the lobby. We started in the Greek and Roman sculpture halls, which have huge skylights to mimic the courtyard of a villa, and then we joined one of the tours to see highlights throughout the museum. The tour was a great way to curate our museum visit, since we couldn’t see everything in one trip, and our tour guide was engaging and knowledgeable. Halfway through our tour, though, we tragically lost our group when we stopped to take pictures on the way to the American Wing. We consoled ourselves by visiting the special exhibit, which featured medieval religious art shown with haute couture it inspired in the early 2000s.

We exited the Met in a dazzle of light—the sun was at the perfect angle to catch the sparkling fountain and light up the marble steps and buildings further down Fifth Avenue. We wanted to catch the last ferry to Governor’s Island, but we had to get something to eat first—it had been a long time since the bagel sandwiches. We decided to get veggie burgers from one of my friend’s favorite places near her old apartment. Her neighborhood was closed to cars for what looked like an impromptu street fair, with dancers and people selling t-shirts and jewelry. While we waited for our veggie burgers we chugged water and I charged my phone, which was at a perilous 3%.

Burgers in hand, we ran for the subway to Lower Manhattan, trying to make the last ferry to Governor’s Island. When we got to the dock, though, we found out that the last ferry was an hour earlier on Saturdays, so we had already missed it. We were right by Battery Park, so we sat on a bench and enjoyed the late afternoon sun, talking about our next move. We decided to watch the sun set from the rooftop bar at the Standard Hotel in the Meatpacking District.

We made it to the Standard Hotel but weren’t sure how to get to the rooftop—my friend had been there before but they were doing construction work on the entrance she had used before. We took the elevator in the hotel lobby to the top floor and walked out to a plush entryway where a bouncer checked our IDs and the hostess advised us that “since this is an upscale cocktail lounge, they like people to be a little more dressed up.” I thought they were going to turn us away for being underdressed, but then they ushered us inside to a swanky cocktail lounge with intimate low tables and a view of the city skyline from panoramic windows. We definitely weren’t at the rooftop bar we had been looking for, but we decided to stay.

We walked up to the enormous gilded bar, which reached up to connect with the golden ceiling, and ordered drinks, feeling a little out of place. The hostess was right—most of the other guests and the waitstaff were dressed up, although there were a few other people wearing sneakers and shorts. We savored our drinks and watched the sun set over the Hudson, trying to act cool. 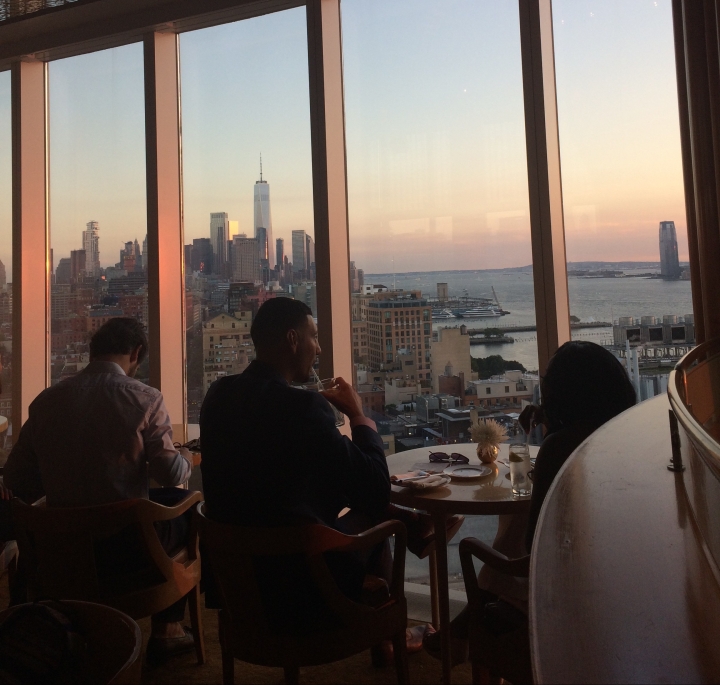 We had one more spot on our itinerary—Spin, a Ping-Pong bar owned by Susan Sarandon. We walked there from the Meatpacking District, past skyscapers and cabs and the general buzz of New York City on a Saturday night. After our long day of walking, we happily sat at the bar, watched the Ping-Pong players ham it up, and hoped for a Susan Sarandon sighting.

After eating our weight in French fries, we headed back to Brooklyn. My favorite part of the day was when we got back to the apartment. We changed into pajamas, dragged a couch cushion onto the fire escape (SO NEW YORK), and sat outside, cool and comfortable, talking about what people we knew in college were doing now.

Do you have a favorite spot in New York? More importantly, does anyone know how to get to the actual rooftop bar (not the upscale cocktail lounge) at the top of the Standard Hotel? Let me know in the comments!