I was having a normal Tuesday at work when H texted me unexpectedly to ask if I wanted to go see Hamilton that night. I was surprised, since neither of us had expressed interest in seeing it before, and even more confused when he asked if I wanted to have dinner with our state delegate before the show. I quickly decided that I would probably enjoy Hamilton, since most people do, and agreed to go.

I raced home after work to change into a glamorous but appropriate outfit: a fit and flare J Crew dress, leopard print flats, and a sparkly statement necklace. I was running fifteen minutes late as always, and by the time I had made it to Foggy Bottom, we were already late to dinner. H and I jumped on the Kennedy Center shuttle along with a bunch of older people who were dressed up like they were going to the opera, and H explained that one of his relatives got the tickets as part of a fundraiser and couldn’t use them.

We hustled into the restaurant at the Kennedy Center, looking for our senator and the aide that would meet us there. We found them and enjoyed a quick dinner, chatting about Colonial Williamsburg and joking about how I hadn’t changed my voting district yet. I had been to the Kennedy Center before, on an orchestra field trip in high school, but I hadn’t been upstairs and I was enchanted with the sun-filled second floor and the view of the DC skyline from the terrace.

We sat down a few minutes before the show started, and I scanned the program for familiar-sounding songs, feeling woefully unprepared. I enjoy musicals much more when I’m familiar with the songs beforehand, and I had only heard the Hamilton soundtrack once, on a road trip two years before. I was singing along by the end of the first act, though, and I couldn’t take my eyes off the gorgeous choreography and flawless set transitions on stage.

At intermission we took a picture in front of the Hamilton backdrop like every other person there, then ran outside to catch a glimpse of the DC skyline at night. I could finally scope out what everyone else was wearing, and although I was jealous of the women wearing stunning jumpsuits with heels, there were also people in touristy shorts and sneakers. The second half of the show was much sadder, but I still enjoyed cheering for Thomas Jefferson and the Virginians. 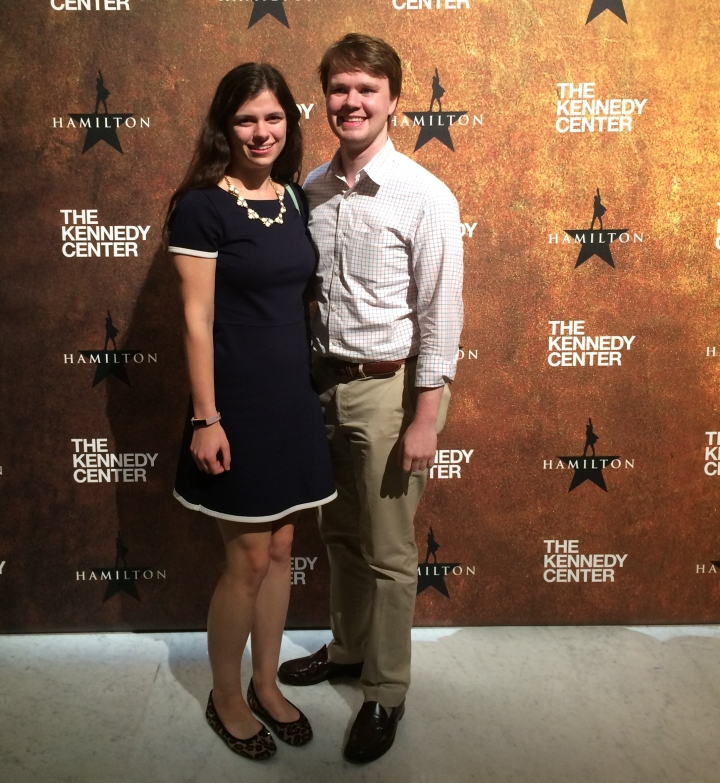 After the show, we thanked our delegate and walked to the metro, since the streets were packed with post-Hamilton traffic. Overall, I enjoyed Hamilton way more than I thought I would and I’ve been listening to the music for weeks afterwards.

The theme of satisfaction in the show is interesting because Hamilton’s “never satisfied” disposition reflects the curious mix of morality and greed that caused the American Revolution. Early America was more like England than we’d like to think, and most of the much-vaunted new freedoms were only for white, male landowners. Hamilton fights for American independence, but he acts as much for personal gain as the common good.

Hamilton also gives in to Aaron Burr at the end of the show. (I would say spoilers, but how can you spoil historical events?) In the final duel, Hamilton let Burr shoot him—he didn’t want to go on living anymore. Hamilton may have chosen to surrender, sapped of his will to live since he knew he would never be president and nothing would bring back his son. The play explores the idea that living through tragedy is more difficult than dying.

Have you seen Hamilton? What did you think? Let me know in the comments!

One thought on “Hamilton at the Kennedy Center”