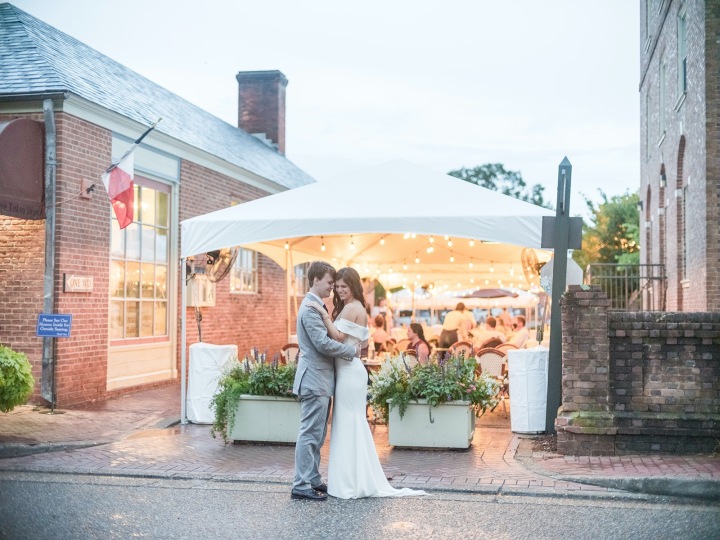 I was so excited about the rehearsal dinner, since it was the start of the weekend I had been planning and looking forward to for months! The rehearsal dinner was at one of our favorite restaurants in Williamsburg, the Blue Talon, a French bistro a block away from the restored area with delicious food and an elegant, intimate atmosphere. (I realized while we were in Paris that the Blue Talon copied everything Parisian restaurants do, right down to the glassware.) H’s mom did a wonderful job planning the rehearsal dinner—she knows how to throw a party!

Since H and I rescheduled our wedding from our original date in June to a Friday in August, the rehearsal and rehearsal dinner were on Thursday, which I mistakenly referred to during planning as “Friday” enough times to make everyone absolutely crazy. I woke up on Thursday morning with a surreal feeling—the wedding weekend was finally starting!

H and I had driven to Williamsburg the day before, since I didn’t want to chance getting caught in traffic and then being late and stressed all day. Thursday morning, I went to the grocery store for snacks to stash in our rooms for the next day, then H checked into his room at the Williamsburg Lodge and I had an appointment at the Williamsburg Spa (one of my favorite things about Williamsburg!) for a blowout and mani-pedi. Since I had the world’s fanciest rehearsal dinner dress, I wanted my hair to look nice without having to style it myself at the last minute in the terrible Williamsburg-in-August humidity. My sister-in-law, the maid of honor, met me at the spa and we got our nails done together, which was so relaxing! I loved having some alone time with her before the rehearsal.

Once my nails were dry, I checked into my room at the Williamsburg Inn, which was stunning. Everything was ornate and gold, and the room was enormous, with a seating area next to the bed and a huge marble bathroom. The hotel staff had set out a beautiful flower arrangement on the desk and a favor for me to take home, a tiny ceramic blue-and-white box! The best part was that a bellhop had whisked all of my luggage—wedding essentials like two huge dresses, my entire bathroom of toiletries from home, and a 32-pack of bottled water—up to my room already, so I didn’t have to drag it up from the car myself.

I didn’t have too much time to admire my room, though, since I had to start getting ready for the rehearsal! I slipped into my dress and did my makeup, then accessorized with a tiny gold necklace and pink earrings (presents from H), a gold cuff bracelet that had been my dad’s mother’s, and a tiny gold purse that was my mother’s grandmother’s. The purse was so small it only held my room key, a credit card, and a lipstick, and I had to hold my phone in my hand, but I wouldn’t have used another one for the world! I wore neutral heels, but I could have chosen any shoes, since they were totally hidden by my dress.

It was pouring rain, so I walked over to the terrace overlooking the Fountain Garden, our rain backup location for the wedding. Even though we had postponed both of my bridal showers, I had been saving ribbons from the presents H and I had opened, which I had handed off to my mom earlier that day, and she and the pastor’s wife had made an adorable ribbon bouquet for me to hold during the rehearsal! Once everyone had arrived, we checked in with the minister and organist, did two quick run-throughs of the ceremony, and then talked to the wedding coordinator from the Williamsburg Inn about some last-minute details. It was still raining hard, so we bundled into our cars and drove to the Blue Talon for the rehearsal dinner.

In true Parisian fashion, the Blue Talon had turned the street next to the restaurant into a beautiful outdoor seating area, with a tent strung with twinkle lights overhead and flowers everywhere. My brother and sister-in-law were there with my niece, the flower girl, who was so excited about her role in the wedding the next day that she was literally jumping up and down, and my 19-month-year-old nephew, who we deemed too young to participate in the ceremony. I saw my parents catching up with the pastor and his wife, who are good family friends, and that the “young people table”—H’s brother, his girlfriend, and H’s stepsiblings—had made it from DC. Obligingly, everyone had dressed up to match the formal attire H and I were wearing. Our photographers were there as well and we got to meet them in person for the first time.

Before I knew it, it was time to sit down for individually plated appetizers, pasta primavera, and chocolate noisette. H’s parents gave toasts, and then we watched a slideshow with pictures of H and me that H’s mom had created. I loved that the rehearsal dinner was so intimate, really just our immediate families, and I can’t imagine a more beautiful location. It was such a sweet way to start the wedding weekend!

One thought on “Our Rehearsal Dinner”

Ultimate fall color palette
Looking for a place to hang my hat
I want to getaway
Did you guys know that there’s only one d in Stanardsville and the second weekend of October is still too warm to wear a fleece hiking?
Spent most of this weekend wearing over-the-top hats, what else are fall getaways for?
Tasted some wine, spotted a wedding…overall, a successful winery experience